You know how I love infographics and this is just the best of everything, a map, plants and history all in one.

I found it on Slate, their text says:

The map, printed by the National Wholesale Druggists’ Association for use of pharmacists during a promotional campaign called Pharmacy Week, was intended to boost the image of the profession. At a time when companies were increasingly compounding new pharmaceuticals in labs, pharmacists wanted to emphasize their ability to understand and manipulate the familiar medicinal plants that yielded reliable “vegetable drugs.” “Intense scientific study, expert knowledge, extreme care and accuracy are applied by the pharmacist to medicinal plants and drugs,” the box of text in the map’s lower left-hand corner reads, “from the point of origin through the intricate chemical, botanical, and pharmaceutical processes employed in preparing medicine.” As historians Arthur Daemmrich and Mary Ellen Bowden write, the early 1930s were a turning point in the pharmaceutical industry.

In the previous decades, chemists working for large companies had begun to systematically invent new medicines for the first time, developing synthesized aspirin and vaccines for diseases like tetanus and diphtheria. The 1938 Food, Drug, & Cosmetic Act would bring a heightened level of federal regulation to the production of new medicines. And in the 1930s, 1940s, and 1950s, researchers would go on to invent a flood of new antibiotics, psychotropics, antihistamines, and vaccines, increasingly relying on synthetic chemistry to do so. The pharmacist’s direct relationship to the preparation of medicine would diminish accordingly.

I am pretty sure that most people don’t realize that the change over to synthetic drugs was that recent.

That in your grandparents day the pharmacist actually mixed up a medication for them, they didn’t just transfer pills from a big bottle to a smaller bottle. Did you? 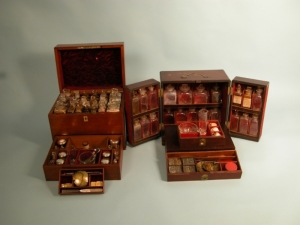 Slate Article: History of medicinal plants: Map of the plants in the United States from 1932.

© Inga Duncan Thornell and www.dunthor.com, 1994 – 2021. Unauthorized use and/or duplication of this material without express and written permission from this blog’s author and/or owner is strictly prohibited. Excerpts and links may be used, provided that full and clear credit is given to Inga Duncan Thornell and www.dunthor.com with appropriate and specific direction to the original content.